Live from the Powerhouse 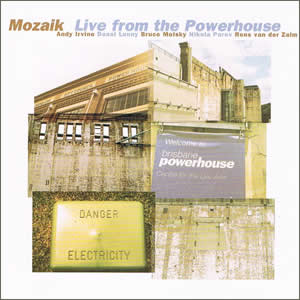 Mozaik had a very short time, from their inception and arrival in Australia to their first gig in a pub in Melbourne, to get a show together. It was fortunate that the pub gig was a warm up for Port Fairy Festival because we were very unrehearsed at that first gig! I can remember waiting to go on and feeling absolutely terrified!

The tour lasted about a month and towards the end of it, when we were a little bit more relaxed with the material, somebody - maybe the soundman, Joe Ferguson - suggested that we should record the two concerts we were playing in Brisbane at the Powerhouse. How happy we are that we did!!

I will never forget this tour. We were a new band - I was the only person who knew everybody. Driving around Australia playing some brilliant music. It was a dream come true!!